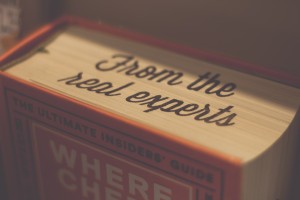 A colleague who read my book Working with SMEs approached me and posed the question, “What is the difference between a thought leader and a subject matter expert?”

She didn’t ask the question as a challenge, and I don’t think she expected an answer on the spot. She asked it in an exploratory way. We looked for a moment at each other, and I said I would think about it. I knew there was more to the distinction than an easy definition of each term. For the last two months, I’ve been thinking about it.

I liken “thought leader” to the term “sensei” because it is not an honor you can bestow upon yourself. When I studied Lean, I encountered a man who referred to himself as a sensei or “wise one”. Other Lean practitioners took me aside to explain that he had committed a faux pas because one does not refer to oneself as a sensei. It is presumptuous. Other people may refer to you as a sensei, but you may never call yourself one. In that way, just because someone calls themselves a “thought leader” does not make it so.

Thought Leaders Have Perspective and Vision

Thought leaders are exactly that – they have thought about things a long time, have opinions that are valuable and valid based on their background, and are willing to be out in front of the crowd leading others in a certain direction.

Last year, I spent four days attending a live, online seminar by author, speaker and trainer Brendon Burchard called the Thought Leader Roadmap. I wanted to see what he had to say about thought leadership. He is of the opinion that you can either be a thought leader by experience or you can become one by studying an issue in depth and then speaking out about it from a position of knowledge after repackaging what you’ve learned from reading and interviewing experts.

Which neatly leads us to the difference between thought leaders and experts.

Experts Have Deep Knowledge about a Subject

Some academicians have actually come up with a literal definition of a subject matter expert. An expert is someone who has studied a topic for about 10,000 hours or at least five years. Many true experts in complex topics like physics and biochemistry become experts only after 20 years or more of diligently working in the field. However, their subject matter expertise does not necessarily make them a thought leader. Some of the world’s greatest SMEs are unknown people toiling in the corner of a lab somewhere. They aren’t leading anything or anyone. However, they may be blazing trails in science or technology that very few people will ever know about, except that your smartphone knows where you are, your Internet connection gets more reliable every year, and cancer is now considered a chronic disease in some circles.

A SME is not always the brilliant biochemist in the corner lab, though. A SME in your organization is someone who knows something very well after years of being in your company. You have subject matter experts who know your business deeply and possibly even irreplaceably in accounting, sales, engineering, manufacturing and administration. They aren’t thought leaders. Most people don’t know what these quiet SMEs are thinking or even know who they are. And for the purpose of being a SME in their corner of the world, the concept of thought leadership is irrelevant.

Comment0 | Share | Tweet | Share | print | email
Categories: Expertise, Knowledge Transfer, Subject matter experts
Disclosure of Material Connection: Some of the links in the post above are “affiliate links.” This means if you click on the link and purchase the item, I will receive an affiliate commission. Regardless, I only recommend products or services I use personally and believe will add value to my readers. I am disclosing this in accordance with the Federal Trade Commission’s 16 CFR, Part 255: “Guides Concerning the Use of Endorsements and Testimonials in Advertising.”